Natalie is a self-taught designer living in Austin, Texas, and has worked for some of the biggest and most innovative companies in New York, Dallas, and Austin before opening a her own shop with her husband, Anthony – all before the age of 30. We sat down with Natalie and talked smartphones, food, and creating your own job stability. You can follow her on Twitter @natalievi and check out her work on Dribbble.

Tell us a little about yourself.
I’m a self-taught designer living in Austin, Texas with my husband, Anthony, and our little rambunctious dog, Cooper. Both my husband and I were born and raised in Texas so, naturally, we found ourselves back in the state a couple of years ago. Before that, we spent almost 6 years in Brooklyn, New York. Together, we run a local mobile product design studio we call Funsize.

When did you first realize that you were interested in design? What excites you about design?
There were two things I loved doing when I was growing up: playing in the mud and doodling on anything with whitespace. Creativity always came naturally to me whether it was in the form of sticks in the dirt or crayons on paper. When I hit 12 years of age, my older brother introduced me to Photoshop 3.0 and not long after, I discovered blogging platforms–Xanga, Geocities, AsianAvenue–and started designing and coding several of my own journals. It was a great release for my teenage angst at the time.

The next few years was spent refining my newfound skills by maintaining and constantly redesigning my blogs. It was then that a friend noticed what I was doing and asked if I wanted to help his consulting company.

I’m attracted to design not just for the pretty colors but for everything that goes on behind the scenes. I am intrigued by the way design ties into the human psyche and how a product you design can completely change human behavior. Aside from wanting to make things look beautiful, design gets me really excited when I know that what I’m working on is a product I believe in and that it has the potential to improve peoples’ lives.

When did your focus shift to mobile?
The first time I touched anything outside of the web was when I was working for R/GA on the Verizon Wireless team. Shortly after I started there, I slowly transitioned into designing applications for Blackberry, Android, and Brew devices as well as televisions. The funny thing about my foray into mobile is that, unlike most mobile designers, I didn’t start designing for the iPhone until later down the road.

Tell us about your career path so far–where did you begin and how did you end up working for yourself?
After I landed small contract jobs with a friend’s company in early 2003, I continued designing and coding for a while afterwards until I realized that design was something I wanted to do for the rest of my life. I immediately applied for an internship with imc2 in Dallas while still attending classes at the University of Texas at Arlington. Eventually, I dropped out of college knowing that I was learning much more at my internship.

The eagerness to learn kept growing and in 2006, I moved to New York City where I spent time in the ranks at well known agencies absorbing anything they wanted to teach me. I discovered along the way that I had a deep interest in focusing on mobile design, which then led me to Fjord, where mobile design was my primary focus.

Anthony, my husband, and I were both working on mobile products separately and realized that we could do what we were doing separately, together, and do it smarter. It’d give us the ability to create a lifestyle balance that we’ve dreamed of without the constraints of being employed. That’s when Funsize emerged.

What do you do at Funsize? Tell us a bit about your projects.
Funsize is a mobile product design studio with a sole focus on native application design. Development is not our forte so we’ve chosen to stay out of that space. Our clients run the gamut from Fortune 500 companies to small bootstrap startups. We have a lot of interesting, albeit confidential, projects going on in the studio right now. To be as vague as possible, some of the projects we’ve worked on include: high-level conceptual work for a large San Jose-based payment company, a merchant payment product whose direct competitor is Square, a property management application for an Austin-based rental property company, and last but not least, a DIY-based multi-platform product that will be integrated with Google Glass.

What are the biggest challenges for you, working in the mobile space?
The challenges for me are the same things that keep work exciting: the ever-changing device landscape, the unknowns of where technology will take us, and how quickly we’re able to adapt to it as designers.

Who have been your biggest inspirations?
Besides the obvious answer, which would be my mother who is also self-employed, I’d have to say my husband. Without him by my side supporting me, encouraging me, and teaching me, I wouldn’t be half the designer I am today. I owe my career to him because I never would have had the courage to do it on my own.

What 5 things can you not work without?
Rdio, a neat and clean desk, pen and paper for spur of the moment ideas, the FNSZ mobile device lab, and my cabinet of [really] unhealthy snacks

If you had all of the time in the world, what new skill would you want to learn next?
I would love to attend culinary school and work my butt off to become a chef. It’s a different form of art that will still allow me to utilize the right side of my brain and hone my knife-wielding skills. I also like to eat. A lot.

What pieces of advice can you offer to those looking to start their own companies?
Many people often refer to their full-time jobs as “stable”, but how stable is it if you can’t control your own destiny? You can be fired at any given moment for no specific reason. Carve out your own destiny and create your own stability; don’t let others do it for you. Oh, but make sure you master your craft so you can actually be successful.

If someone wants to transition to mobile design, what should their next steps be?
First, I think you have to figure out what type of products you’re interested in working on, whether you want to work on native or web applications, and what side of that you want to be on: client servicing or in-house. From there, the most obvious way is to find an internship focusing on those certain products. If you’re unsure, start dabbling by taking on side projects to build your general skill set as a mobile designer. That means learning the platforms and the differentiating factors between platforms, study the human interface guidelines of each, and examining their design patterns.

If you could rebrand any company in the whole world, who would you pick?
Southwest Airlines! 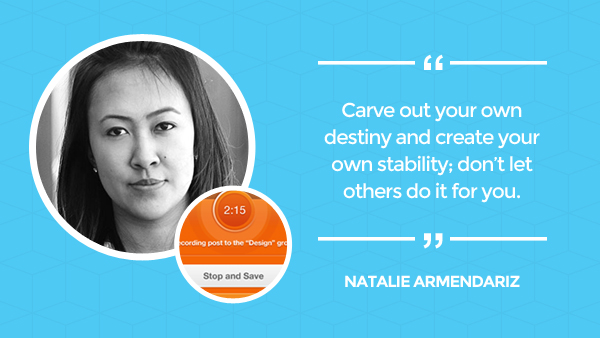