The Ultimate Guide to Landing A Remote Job You Love

As the tech industry continues to reshape the way we work, it’s also upended the notion of a traditional office as being the only setting for career success. What was once thought of as a static concept—the cubicle, the break room, the commute—is now being personalized to fit the needs of every employee and company on a more individual basis: and that includes remote work. How far can you take the idea of a remote office? I’m so glad you asked.

It all comes down to Wi-Fi. The foundation a modern remote worker needs is a strong internet connection and a discerning eye (assuming you already have a desktop or smart device of some kind). In the past decade, everyone from scientists to extreme sports enthusiasts to sheep herders, have been experimenting with making the more unusual parts of the world—and universe—Wi-Fi friendly. The sky is actually not the limit in this case, though Mars might be—for now. (More on that later.)

Whether you’re fighting cabin fever, planning a workcation, or just figuring out how working remotely will look on a day-to-day basis—I’ve got good news. An office can be totally up to you to define, and here’s nine totally unexpected places to bring that laptop and crank out some work, from royal libraries to the Moon.

Yep, someone rigged one of the tallest summits in the world with Wi-Fi—just think of the victory selfies you could take. Not to be outdone, Wi-Fi has also hit Mt. Everest, but only at the base camp. (Although, the Nepalese government reportedly plans to expand service in the future.) If you’ve got the extreme adventure bug, tell your employers not to worry. You’ll totally be skyping into those crucial meetings from 12,000 feet above sea level.

The Canadian National Parks Department upped their hotspot game as of 2014, ensuring that campers and wannabe naturalists could stay connected while giving in to wanderlust. If you’ve dreamed of ditching the walls of a cubicle for the solitude of a campsite or trailer park, start planning your trip. Be sure to check the specific amenities of the park you’re heading to because the Wi-Fi access varies, and don’t forget to pack a charger, extra battery pack, and some serious rain slickers.

Internet culture has become so ingrained in our society at this point that yes, I am suggesting you consider working remotely at this brewpub. In general, hanging out during the day (or night, I won’t judge) at a cute, independently-owned pub, with a great atmosphere and a great Wi-Fi connection sounds like a perfect way to knock out some work while enjoying a meal or tasting some new brews. Not near Chicago? Try Asher Brewing Company in Boulder, CO, ABC Brewing Company in Ann Arbor, MI, and Santan Brewing Company in Chandler, AZ, all of which also offer free Wi-Fi access to their guests. Time to start tasting.

The Jewel is just one example of a hotel with free Wi-Fi, and what does that mean for you? A cushy place to set up shop for the day. If you’re located in a city, or even just working from one for a short period, hotel lobbies are great places to find an internet connection. Larger, historic hotels like The Plaza in NYC offer a variety of shops, lounges, and dining, so popping into one of them for a workday won’t feel awkward. The Beverly Hills Hotel in LA, The Palmer House in Chicago, and the The Brown Hotel in Louisville, KY, are all big, swanky places you could set up a laptop and sip a latte while getting your work done.

In what will hopefully become standard procedure all over the world, donkeys at a biblical reenactment site in Kfar Kedem, Israel have been outfitted with Wi-Fi harnesses so that guests can surf the web while exploring the historical site. If you’ve ever worried about the likelihood of working remotely while surrounded by your animal friends—great news. Other countries are jumping onboard. In North Wales, sheep are being outfitted with Wi-Fi to gather data and potentially provide Wi-Fi to remote areas.

As of 2010, the National Mall has free Wi-Fi, which means that there is an array of museums, monuments, and parks you can work from. Try grabbing a bench along the tree-lined reflecting pool by the Lincoln Memorial, or duck into the sculpture garden at the Hirshhorn Museum. When you’re done working, take a stroll through some of the renowned restaurants, parks, and other notable points of interest in the American capital.

Libraries in general usually offer Wi-Fi access, and semi-private to private workspaces. For all of those who are craving a guaranteed quiet space to knock out some work, it’s time to slide into the stacks. You can’t do better than the British Library—the ambiance can’t be beat. And don’t just go for the Harry Potter Exhibit; the British Library is a sprawling building with free Wi-Fi and reading rooms. In addition, the library also offers free business support for entrepreneurs, inventors, and small business owners.

With almost 30 food vendors and a free Wi-Fi connection, North Market is a playground for remote workers who want Vietnamese for breakfast, Indian for lunch, and pierogies in between. And the North Market isn’t the only place like this: Cultural centers in up-and-coming cities often have Wi-Fi access to accomodate both vendors and guests. Check out Eastern Market in Detroit, Oxbow Public Market in Napa, CA, and Lexington Market in Baltimore. (They’re all comparable food utopias.) There’s never been a better time to channel your inner Anthony Bourdain while taking a conference call.

A team of MIT researchers working with NASA have actually figured out how to beam Wi-Fi all the way to the moon. Next up? Mars. While the average remote worker is probably not blasting into orbit anytime soon, this is still pretty cool, right?

The Ultimate Guide to Landing A Remote Job You Love 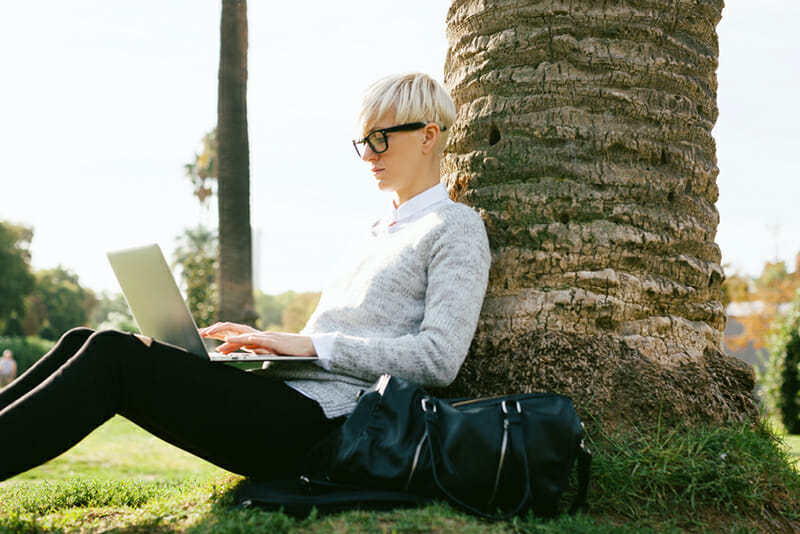