College is an integral portion of the American Dream: It’s theoretically what propels you forward into the middle class existence we were all promised. The reality is that that dream isn’t attainable for all of us, especially not in a system that rewards the inherited privilege of some—accidents of birth, instead of merit. “Where did you go to college” seems like a standard—albeit boring—dinner party question, and assumes that college is a universal experience for all of us.

The truth is that it’s not, and that assumption is a harmful one that rests on issues of race and class. Anecdotally, friends tell me that because they didn’t go to or finish college, their experiences are frequently invalidated or looked at with scorn. Here’s what they’re tired of hearing, along with some real answers to common misconceptions.

1. Why did you drop out of/not go to college?

People drop out of college or don’t attend in the first place for infinite reasons, but to name a few: the staggering cost, the need to take care of a family member, illness, pregnancy, they didn’t want to. In short: not a one of these are anyone else’s business.

Asking this question also assumes that going to college is the norm, and that to deviate from that path is therefore abnormal. In reality, this isn’t the case. According to a 2015 US Census report, only about 1 in 3 American adults have a Bachelor’s degree. College certainly isn’t the only path to adult life—nor is it even the most common.

2. The college years were the best years of my life. You missed out.

While it’s fantastic that you enjoyed college so much, those four years aren’t necessarily a positive experience for many people. Marginalized people (especially multiply marginalized people, like, for example, women of color)—face significant challenges in college. Rape culture is real (says statistics, not this special snowflake; see the multiple federal investigations into the crisis facing campuses), and it impacts people of all genders. Racism is rampant in academia, and especially impacts Black students’ mental health, according to a study by the JED Foundation and the Steve Fund. And college is often not accessible for people with disabilities. For example, my friend Andrew Fisher is Deaf, and he told me that as an undergraduate at Brooklyn College, he constantly struggled with the interpreters assigned to him by the school, who often weren’t even certified in American Sign Language. “They would basically get people off the street,” and he could miss weeks of information because of bad interpreting. “It was incredibly frustrating.”

Even for those of us without marginalizations, college can still be a minefield. Roughly one-third of U.S. college students reported depression that impacted their ability to function in a 2013 study by the National College Health Assessment. And it’s no surprise: My colleague Lauren Lang, a former college professor, says that in her experience, the enormity of the adjustment to college life, “academically, socially or romantically, and emotionally, can trigger depression and anxiety in anyone.”

Maybe college was amazing for you, but it’s likely it wasn’t for everyone you know. What did they miss out on? Your experience—which, unless they look exactly like you, come from the same exact background as you, and have the exact same opportunities you’ve had in life, will look nothing like their experience.

3. How can you expect to have a career?

Here’s the thing: You actually don’t need college to have a full career. In fact, some economists are encouraging millennials to consider trade schools instead of a four year college, according to an NPR report. Plumbers, pipefitters, and steamfitters, for example, have a median pay of $51,450 per year, according to 2016 data from the Bureau of Labor Statistics, with the highest 10 percent earning more than $90,530.

And if you’re looking to enter a booming industry with wild opportunity , online coding schools make it easier than ever to enter the tech workforce without a college degree, and at a fraction of the cost and time commitment. According to a LinkedIn report, 2017’s top 10 most in-demand job skills are all tech-related. Tech salaries are serious—and don’t require a four-year degree (especially if you’re working as a freelancer).

4. When are you going back?

Like all of these questions, this one is rude and not your business—and assumes that not finishing college is some inherent failure that has to be corrected. A college degree simply isn’t a measure of someone’s worth, ability, or potential.

Aside from all that, there’s one hell of an argument to be made that college might no longer be worth it. Consider that at the end of 2016, 44.2 million Americans owe a total of $1.31 trillion in student loan debt, according to the New York Federal Reserve—what Forbes calls a “crisis.” Multiple major publications and institutions have run the numbers on college and found that for a staggering number of degrees awarded, the price tag is oftentimes just too high.

Is this post advocating against going to college? Absolutely not. If college is a goal for you and is financially feasible, then by all means: Go for it. This is only meant to make clear that college isn’t the only option—and there’s no shame in not having gone.

Interested in a career that doesn’t require a college degree? Download the free Ultimate Guide to Coding for Beginners. This 60+ page ebook will show you how—with only a personal computer and an Internet connection—you already have the tools you’ll need to learn coding and design skills. 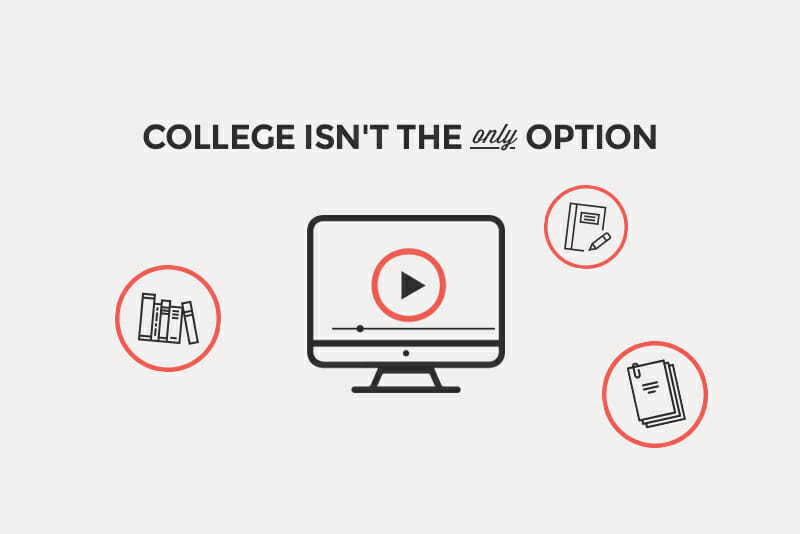