A version of this article previously appeared on FairyGodBoss.

Before we start, let’s take a look at what a plateau is. It’s “an area of relatively-level high ground,” according to the dictionary. In other words, it’s “a state of little or no change following a period of activity or progress.”

Does this sound like you? When it comes to your career, a plateau isn’t all bad. It means that a) you have a career, and b) you’ve leveled off to a stable place after getting somewhere. It means you’re in the game and can consider all of your options. Career pivot, anyone?

I have a client who took six weeks to find a job when we were working together. He landed at an incredibly prestigious bank, but in the wrong department (for him). He wanted into the company, and he wanted to move into another department. But the firm had a strong rule that you may NOT move within the company for at least 18 months. They enforced a plateau! This helped people stabilize within the company, learn and do their job, and move on. My client decided that it was worth it, and that he’d use that time to develop strong relationships and determine what was next for him. He planned to work with the plateau.

But sometimes a plateau sneaks up on you, as in “I’ve been doing this job for three, is it… wait a minute, I’ve been here for six years! Time flies!” This is a plateau you may not have known you were in, and it may have been curtailing your progress. Here are four signs you’ve hit a career plateau, and how to fix it, too.

As mentioned above, my client’s bank required that staff stay in a role for at least 18 months before they can make a change. Look around at people in your company (ask HR if it’s a large company – they often keep statistics). How long do people stay at their position — and in your company? Find out where you are relative to industry and company averages.

Now that you’re armed with data, consider where you stand. You might be in a better position than you think. And if you’re lagging; this is a great time to check job postings. Don’t let your interview skills get stale; there’s no harm in looking around. In fact, it may reinforce that you’re very happy with your current job.

You may be comfortable doing what you’re doing, but have you become complacent? Take a good look at your situation; you don’t have to have the frenzied growth of your first 90 days of work, but are you still challenged in this role? A kid outgrows a beloved stuffed animal. A dog outgrows their chew toy. Are you still stimulated by what you do or have you outgrown it?

You might be in a plateau phase, but it might be exactly what you need. Figuring out what to do about your plateau has less to do with the plateau itself than it has to do with your life in general. For example, I have a client who “coasted” in her very well-paying job straight through her chaotic divorce (which lasted two years). She was thrilled to be on that plateau. The job gave her lots of flexibility, time off and money. She had no interest in career growth at the time; the plateau stabilized her through her change. Where are you in your life?

Every client I work with wants the same thing: to make a meaningful contribution. We all want to change the world for the better, using our own gifts and talents. If you no longer feel like you’re adding value, it’s time to move on. At best, you’re getting stale. At worst, this can have a negative impact on your sense of self esteem and lead to depression over time.

If you’ve answered yes to any of these, you may have hit a plateau. The first thing to do is to have a look at what jobs might be of interest to you – internally and externally. Have a look at the jobs on Fairygodboss, or whatever job board you like (including internal job boards at your company!).

If none of these are turning you on, is it time to go back to school, or change gears entirely? Beware of the seduction of change for change’s sake, and keep pushing hard to think of jealousy jobs – the jobs that other people have that you wish you had. Pay real attention to jealousy; it’s often a sign of a place you’d rather be, and can be your best indication that a change is necessary—and possible! 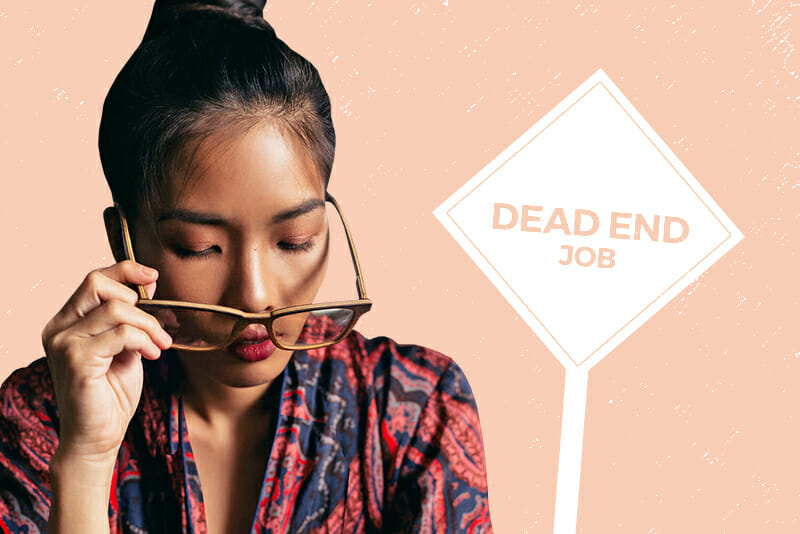