With all the jargon and acronyms used in coding, it can feel hard to break in as a newcomer—or to simply follow along in conversations about the tech world. Nobody wants to feel like the odd one out, asking questions of people who seem to be effortlessly in the know. We answered some super basic coding questions so you don’t have to Google them in an incognito window.

1. What is the difference between coding and programming?

Simply put: Coding is a process by which we tell computers what to do—how a program should work, how a website should run, etc. Coders use programming languages (more on that in a bit) in order to communicate these instructions. Nowadays, programming and coding are mostly used interchangeably.

2. Do I have to be good at math to be a developer?

It’s easy to think that with its base in 1s and 0s, coding is all about math. And not just any math, but complex calculations—the stuff some of us never learned.

Don’t let a lack of natural math aptitude scare you away from coding. The truth is that extraordinary math skills and coding do not necessarily go hand-in-hand. Research, trial and error, and general analytical thinking go as far as math skills when it comes to learning to code—if not farther, according to a report in The Atlantic. In fact, the most complicated calculations in coding are done by computers—or have already been taken care of by coders who have come before you.

HTML stands for HyperText Markup Language, the standard language used to create web pages. It’s the most basic building block you’ll need for developing websites. It’s also one of the first languages you’ll want to learn if you’re interested in coding. You might remember basic HTML tags from early personal websites like Myspace, where you could customize your page with commands inside <>.

And if HTML is one of the first languages you’ll learn, CSS is probably the second. CSS (Cascading Style Sheets) is the language used to add style to the document you create with HTML. Where HTML comes first and creates the foundation for your page, CSS comes along next and is used to create the page’s layout, color, fonts, and…well, the style.

Both HTML and CSS are absolutely essential languages for being a front end developer. Note that HTML and CSS aren’t the only languages used to code: There’s also JavaScript, Ruby, Ruby on Rails, and PHP, to name a few. (If you’re curious about which language is a fit for your coding goals, check out this article on prioritizing your programming languages.)

4. What’s the difference between a designer and a developer?

While there doesn’t have to be a stark divide between designer and developer (designers can certainly have developer skills and vice versa), designers generally focus on the look and feel of a website while developers focus on making that design come to life.

Designers are in charge of the aesthetics and usability of a website, app, or program. They make sure their products are not only beautiful to look at, but that they make sense from the end user’s point of view. (You are the end user on this site, for example, and one of our designers thought through exactly how to make your reading experience as comfortable as possible.) Designers typically work with tools like Photoshop and Webflow to make mockups of how they want a site to look.

Developers are the ones who handle the coding element building a product—they take that design and turn it into a functioning app, website, or program, using a programming language like HTML. For more about the different kinds of web developers out there, check out this article about the differences between front end, back end, and full stack developers.

5. What computer program do people use to write code?

In order to write code, you can start with something as simple as a text editor like Notepad—code simply looks like letters, numbers, and symbols. As your coding skills improve and your needs diversify, though, you’ll probably want to upgrade to a text editor with more functionality. Editors like Notepad++, Atom, and Light Table are free, customizable, and designed with coding in mind. These programs offer features like autocomplete based on specific programming languages.

Once your code is written, you’ll use another program called a compiler to edit and format your code for a computer to read. Compilers are specific to the programming language you’re working with, and the finished product still isn’t the type of thing you’ll see when you open up your browser—it’s simply code in a more finished format.

Some coders like to use what’s called an Integrated Development Environment, or IDE. IDEs like NetBeans and Eclipse combine text editors with compilers as well as other tools for automating and debugging your code (locating and correcting errors), making them comprehensive suites for coding. With an IDE, you’ll also have a built-in preview so you can see what your code will look like once it’s compiled.

Designing and developing your website is really the heavy lifting part. Once design and development are all set, websites go live through the following steps:

7. What’s the difference between HTML, HTML5, CSS and CSS3?

Time for an HTML and CSS bonus round! HTML5 is (as of this writing) the latest version of HTML. That’s it. The HTML you know and love, just the most updated version capable of reflecting usage on current websites. In particular, HTML5 focuses on features that can be used on low-powered devices (making it ideal for creating mobile applications), the native ability to work with multimedia and graphical content, and new semantic web tag elements (features you use to structure your pages and documents).

Same goes for CSS3—it’s the latest version of CSS, introducing features like rounded corners, shadows, gradients, transitions or animations, and new layouts like multi-columns and flexible box or grid layouts.

Why the 5 and 3 in the names respectively, when all previous versions were called plain old HTML and CSS? These new features marked enough of a departure from their predecessors that it was time to reflect it in the naming. While other upgrades of HTML and CSS didn’t require users to relearn them, HTML5 and CSS3 will require a brush-up even among experienced developers.

8. How do you pronounce SQL?

If you haven’t already noticed, coding is the land of acronyms and other words whose obvious pronunciation might not leap off the page. SQL stands for Structured Query Language and it’s a programming language used to view or change data in databases.

A co-worker told me that at the first coding meetup she ever attended, a smug developer took great pleasure in correcting her when she pronounced it “S-Q-L.” According to him, it was pronounced “sequel.” However, a quick poll of the Skillcrush Dev team revealed that both pronunciations are correct. Whether it’s S-Q-L or sequel, it’s all Structured Query Language at the end of the day. Say it however you please with confidence.

9. Why should I learn to code a site from scratch instead of using Squarespace, Wix, or Weebly?

While services like Squarespace offer tons of templates and options for customization, your flexibility is limited to what the service you’re using has to offer. This can be fine for projects that require simple or fixed functionality, but in order to really have control over your work and to expand your range of options, you’re going to have to know how to code from scratch. Knowing how to code vs. relying on a hosting platform is the difference between knowing how to build your own house and fix things when they go wrong vs. living in someone else’s house and waiting for a handyperson who may or may not show up when things break. (Knowing how to code is also a great career move and a skill that can improve resumes in just about every field.)

It seems like every new tech product runs on a proprietary algorithm, and while it may sound complicated, an algorithm is simply a set of instructions for accomplishing a well-defined task. If your code tells a computer what to do, algorithms tell it how to do what you’re telling it to do. When coding a website or an app, there are always going to be recurring problems or tasks. You could code instructions each time these tasks or problems present themselves, but that would be a serious time drain. Instead, algorithms allow you to identify a set of inputs that, when received by a computer, produce a corresponding set of outputs. That is to say, algorithms are elements of coding designed to make your life easier.

Say you’re working on a website that requires users to enter a valid email address. You would use an algorithm to identify their email address as an input, recognize if the email address is valid, and produce the appropriate output (access to a specific page of the website, for instance). As your experience with coding grows, you’ll start to see that the more you learn, the simpler your process becomes.

Feeling like you’re finally standing on solid ground in the coding conversation? Check out Skillcrush’s free 10-Day Coding Bootcamp for a basic overview of what learning to code is all about.

No stupid questions: beginner tech queries you were too embarrassed to ask, answered! http://hubs.ly/H07yRVL0 @Skillcrush

10 Coding Questions You Were Too Embarrassed to Ask 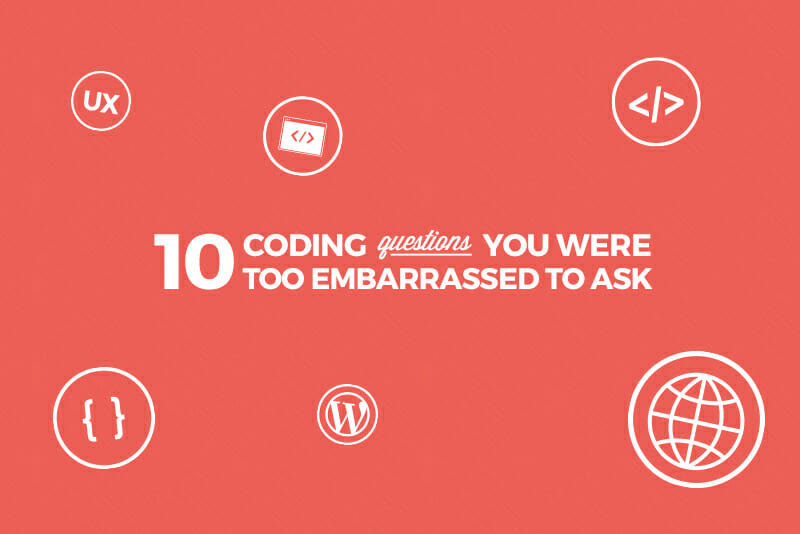