Get Our FREE Ultimate Guide to Landing a Junior Developer Job

If you’re a newcomer to tech, there’s plenty of unfamiliar vocabulary to contend with. Whether it’s programming languages, technical jargon, or the tech world’s litany of acronyms, it can quickly feel overwhelming.

And it’s not just the terms you’ll need to do tech jobs: Things can get weird when you look at the titles of the jobs themselves. From Overlords to Ninjas to Rockstars to the hackers of growth, scanning tech job listings can make you feel like you’ve stumbled into a bad sci-fi movie.

Never fear! Most of these strange sounding jobs are either attempts at fun and creativity gone a bit awry, or make more sense when you know the context. To help strip away the mystery and intimidation, here’s a list of offbeat tech job titles deciphered.

And, while lording over a client’s online presence doesn’t necessarily involve the smoke and mirrors that “Digital Overlord” suggests, web management is an in-demand opportunity for people with front end developer skills. Even companies outside of tech are looking for Overlords…I mean Website Managers.

The descriptions “Technical Evangelist” and “Developer Evangelist” might sound odd, but they’re established titles that actually show up in job listings.

Technical Evangelists are responsible for building support and enthusiasm for specific technologies. A Technical Evangelist working for a company like Apple, for instance, spends their time drumming up excitement for Apple products. Forbes Magazine suggests that Silicon Valley venture capitalist Guy Kawasaki coined the term during his own time at Apple. As Kawasaki describes it, his role at Apple was “to protect and preserve the Macintosh cult by doing whatever I had to do.”

Developer Evangelists have a similar role, though in their case they focus on spreading the word about data platforms (say Microsoft) to developer communities (web developers whom the Evangelist hopes to convert to their company’s platform).

Both of these positions rely heavily on sales, marketing, and communication, but also require a passion for and knowledge of the technology they’re promoting.

There are times when scanning tech job listings can feel like you’ve just shown up at a cosplay convention. But whether it’s a Marketing Operations Guru, a Developer Ninja, or a Social Media Rockstar, the jobs behind these zany titles are typically just everyday Marketing Operations Managers (managers overseeing a company’s marketing staff), Web Developers (people who code websites), or Social Media Directors (managers in charge of a company’s social media presence). Gurus, Ninjas, and Rockstars are a theatrical tinge to make the jobs feel fun and special.

That being said, Seshu Kiran, Founder and CEO at XAir, warns that these titles can be counterproductive and may confuse the hiring process. Kiran recalls a self-proclaimed Ninja applicant whose resume listed his ability to crack complex hardware problems. In practice, though, the applicant was unable to crack the basic electronics required for the job.

“He was good in his own experimental world,” Kiran says, but he wasn’t equipped for the practicality of what the job needed. While Gurus, Ninjas, and Rockstars might sound exciting, at the end of the day, “application of principles and [the] discipline to create products with reliability and proper architecture” is more important than whimsical job descriptions.

For some people, the term “sherpa” brings to mind an expedition to an exotic summit. Sherpas help guide you along the way, right? And maybe that’s why the title “Innovation Sherpa” has found its way into the tech vernacular.

These executives help guide their companies to the summit of innovation and can be responsible for things like mapping out and improving a company’s processes, overseeing user interviews, or bringing in outside perspectives, all in the service of making sure a company continues to grow and evolve.

The title has one glaring problem, though. Far from being just a mountain climbing trope, Sherpas are, in fact, a Nepalese ethnic group, and using their name in an attempt at branding is an unfortunate case of cultural appropriation. This is an example of tech’s whimsy veering into the territory of non-self-aware cringe. It’s definitely better to keep it boring and call yourself an Innovation Manager.

No, this position doesn’t have anything to do with the office rugby team. In this case, Scrum refers to a framework of principles for managing product development. Scrum came into being as a product development strategy during the 1990s, inspired by an academic article written in 1986. In the article, professors Hirotaka Takeuchi and Ikujiro Nonaka described a “scrum” management style where a team progresses as a unit, passing a ball back and forth.

A Scrum Master is a member of a Scrum development team responsible for clearing roadblocks on the path to delivering product goals. Scrum Masters aren’t team leads or product managers, but are more of a barricade between the team and potential distractions. Scrum Masters typically have a background in software development and Scrum Master certification.

Much like the term “hacking” is used to refer to tips and techniques for cooking, personal accessorizing, home repair, and so on, “growth hacks” are techniques for helping a company grow. They’re usually aspects of marketing, engineering, and data analysis.

Once you’ve reached executive levels at some companies it seems you’re free to call yourself anything you want. “Digital Prophet” is one such example. It’s also a title that doesn’t become clearer with context.

The tech title “Digital Prophet” seems to be proprietary to David Shing or “Shingy,” an executive with the venerable mass media company AOL. A quick scan of Shingy’s homepage only says that he “[works] across the globe to identify new opportunities for the business.” It also mentions that he speaks at conferences about trends and the future of the web (which is where all that prophesying theoretically comes in).

Digital Prophet is a good reminder that you’ll sometimes come across weird, one-off titles like this in tech. It’s okay to shrug your shoulders and move on.

Whether Overlord or Evangelist, Ninja or Rockstar, Guru, Prophet, or just plain old Web Developer, the one thing all these jobs have in common is that they require tech skills. If you’re ready to land a job in tech—adventurous title or not—you can start by downloading the free Beginner’s Guide to Landing a Junior Developer Job eBook. It’ll show you exactly what skills you’ll need, what kind of projects you can create with those brand new skills, and even some of the less crazy job titles you can use to carry out your own job search.

Get Our FREE Ultimate Guide to Landing a Junior Developer Job 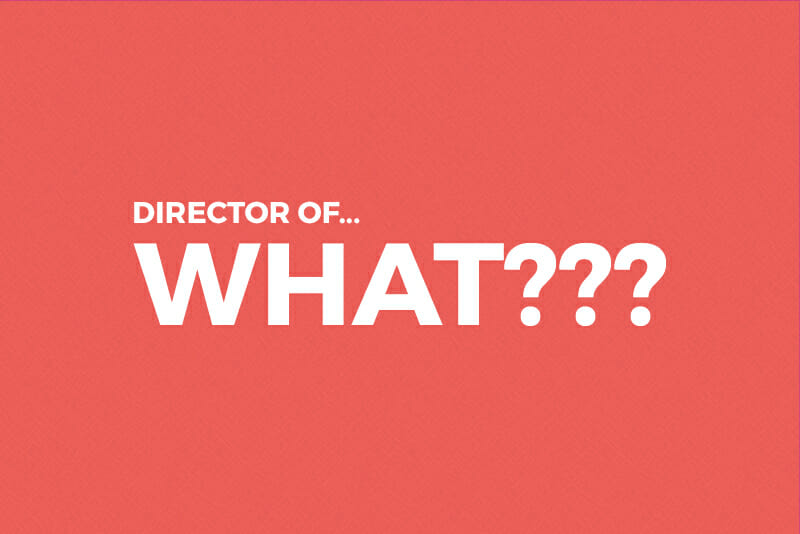