A few weeks ago we wrote about the best cities for freelancers. Now we are looking at the best cities for entrepreneurial women. Though it really comes down to the person, the city you decide to start your business in can make a major impact on whether your business sinks or swims. Women-owned businesses have grown by over 54% since 1997 at a rate 1.5 times that of the national average, according to the American Express OPEN study.

The top 10 cities for entrepreneurs were: 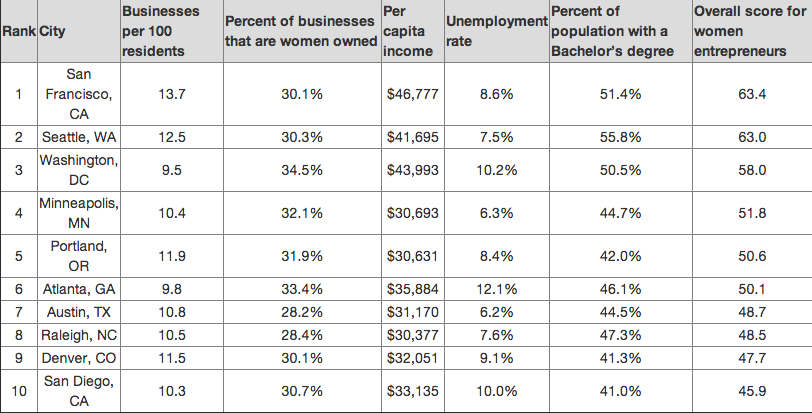 Texas doesn’t seem to be messing around either when it comes to women-run businesses. According to the State of Women-Owned Businesses Report, the Lone Star State has an estimated 666,600 women-owned firms that employ 603,100 workers and have roughly $105 million in revenue. Texas’ growth in women-owned firms from 1997 and 2012 was the fifth-best in the nation at 75%. The lower cost of living and lower cost associated with starting a business in comparison with more expensive cities like New York, Boston or San Francisco is a definite plus for Southern ladies.

So what does this mean? This means that if you are planning on starting your own company or taking your side hustle to the next level you may want to consider being based in or near one of these cities. You will be around more investors and more like-minded people which will help build out your network. It’s tough out there for female entrepreneurs so try to give yourself every advantage possible.

What are the best cities for female entrepreneurs? We'll tell you here http://goo.gl/B4Xxr0 via @Skillcrush

Are You In The Right City To Be An Entrepreneur?