Islam Elshakshuki & Marene Martinez at the Academy for Software Engineering

This week is CSEd Week! If you support Computer Science education, show your support by signing the pledge.

We sat down with two students at the Academy for Software Engineering to talk about their experience at the school, learning to code. Islam Eshakshuki and Marene Martinez are both in ninth grade.

What inspired you to attend the Academy of Software Engineering?
Islam: I was going to leave to go back to my country, Libya, but then we decided to stay. I chose schools that I thought the school’s name was interesting.

I use this website, it’s called Tumblr. It has HTML coding, so I wanted to learn HTML coding so that I could make my own theme.

Marene: We were also supposed to leave the country, it’s my second year here in the US, so I didn’t know I was going to come to high school here in the city. I am originally form the Basque country between Spain and France. My only chance to go to a good high school was this one. I got in here and then they told me that Islam got in here too. We were in the same class at a school on Roosevelt Island, but we didn’t know that we had both applied to AFSE.

What do you think so far? Do you like learning to code?
Marene: It’s interesting. When we started to learn, I realized that once you get the basic things, it’s much easier. Well, maybe not easy, but not as hard.

When we started here, a lot of people knew different computer languages, but I didn’t know anything at all. But then we all started with Alice, which is an introduction to coding.

At first learning Alice was hard. I didn’t know what it was…

Islam: It’s kind of boring and hard when you are doing it, but at the end when you see what you’ve made…

Marene: You feel proud of yourself.

Islam: It’s rewarding to see the stuff you’ve made.

What have you made?
Islam: Right now we are making games in Alice with functions and data analysis. We are about half-way there.

How did you first start learning Alice?
Islam: First we had to read from the book, and see the examples. Then our instructor would give us assignments for things to do. He would give us an example, with instructions for something we had to accomplish, and then you would have to write the code yourself.

Marene: It was frustrating when we started.

Islam: You could make the simplest mistake and if you didn’t notice it, the code wouldn’t run.

What are you looking forward to learning?
Islam: HTML. I want to make my own website.

Marene: I’m excited to learn that too. At first I wasn’t interested in computers, I was like they are so boring! But now I am learning about the new worlds inside of a computer, there is coding and all this different stuff. I am want to learn more!

How does it feel to be a girl learning how to code?
Islam: The school is full of boys.

Marene: But we’re used to it now.

Islam: When girls see Computer Science they see computer and science together, and they’re like, eh, no.

Why do you think that is?
Islam: I think girls, and some guys, they want to dance. They want to go to drama schools, not software engineering schools. They think our school is like in the movies,all these guys, writing these things…with glasses, all nerdy.

Marene: We always see guys doing things. It’s like with everything. You see a guy playing sports…now it’s getting better and there are more girls coming into Computer Science, but we’re still only 7 girls in our class.

Islam: There’s only 35 girls in this school, and there are 135 students. So it gets a little weird sometimes.

If the name, Computer Science, is off-putting, what could we rename it to make it more appealing?
Islam: Make your own things. Make your own…website. It depends on what you like. Design your own website!

Marene: I wouldn’t rename it, I would just make sure to tell people more more information about it. When you say Computer Science it means everything: it could be making a website, it could be writing code, it could be whatever. And people think, oh no, I’m not going to go to that schools because it’s too much stuff, it will be too much work. But it’s not that bad!

What inspires you to be interested in Computer Sciene?
Islam: My dad is really good with computers. I ask him how does he know, and he said that he just picked it up.

Now, I get use computers in every class! It would be cool if when someone had a problem with their computer, they could ask me and I could fix it.

Marene: My mom inspires me. She is a doctor and she is always doing these charts at home. I kind of wanted to learn how she did it, but then I was worried it would be too hard. But now that I’ve come to this school…

Islam: It’s an opportunity to learn, even if your future doesn’t have anything to do with Computer Science, you would still know about it. It’s like a side hobby. Not a lot of people know Computer Science right now.

Marene: And now everything is about technology. Everywhere you go you will find a computer and you will have to use a computer to do anything. So it’s good that we know.

What if you met a girl and she told you that she was worried that Computer Science is too hard for her, what would you say?
Islam: I would tell her that if she’s going to a school to learn, they’re aren’t going to give you hard stuff at first. They will take you step by step. When we first got to school our teacher gave us a quiz and asked if we knew any of the stuff on it, but he told us if we didn’t it was totally fine. I didn’t know anything on the quiz so I left everything blank. Now, I could fill it out!

Get even more inspired by Women Techmakers

It's hard when you are doing it, but at the end when you see what you’ve made, you feel proud of yourself. http://bit.ly/UDVzXf @Skillcrush

Islam & Marene at the AFSE 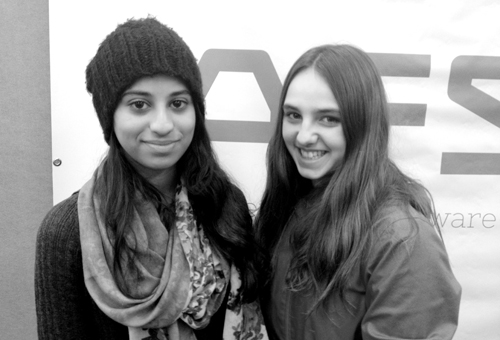