Kara Rota is Director of Editorial & Partnerships for Cookstr, a technology company dedicated to recipes and nutrition and co-founded by Tipping Point Partners, a New York City-based “institutional entrepreneur.” She is also a freelance food writer who studied writing and food politics at Sarah Lawrence College, where she wrote her undergraduate thesis on technoethics, posthumanism, cyborgs and RoboCop. She tweets @karalearota.

When I was ten years old, we got our first computer–my grandfather’s clunky Compaq PC. My parents drove from South Jersey to Manhattan to pick it up and drove home with me in the backseat cradling the monitor at my feet. I remember its weight in my lap, the smell of electronics and plastic, the excruciating impatience to get it home and make it come alive. It was a portal, a found tear in the fabric of my universe that was a door to another world. The next four years were a blur of Compuserve forums about cats; becoming an entrepreneur on Half.com; AOL kids’ chatrooms; collecting cyberpets on Angelfire pages that I proudly HTML-enabled with glitter marquee titles and guestbooks; reading fan fiction; and then, at some point, emerging from my web-cocoon to make real friends I could write about in my Livejournal.

What is the most beautiful piece of technology ever created?

Small Demons is a company I’m excited about because it makes explicit the disappearing boundary between physical and non-physical (i.e. digital) worlds. It’s a metadata company, obsessively cataloguing the people, places and things that are mentioned in books to create a “Storyverse.” This exercise interchanges and intersperses fictional things – invisible, intangible, and previously unmeasurable­ ­– with real objects.

I like technology that breaks down the boundaries between what is real and what is unreal. Everything we build now can be visualized using old metaphors – networks, bridges, lines, webs, nets. Infrastructure has become a metaphor for an increasingly non-physical world in which we live.

What applications do you have open while you’re working?

I break all of the multitasking rules. Some small percentage of my attention is always on my email, and I’m a notorious insta-responder. We work in an open office and gchat each other from two feet away! Between internal and client work, I spent a significant amount of time in Pivotal Tracker, Harvest, Basecamp, and Highrise. I usually have Spotify running in the background, and Twitter if I’m feeling antsy. I go back and forth between screens, so sometimes I’ll be reading an article on my iPad while working on a Keynote presentation on my iMac and responding to emails on my iPhone. I don’t quite have my browser loyalty solidified at the moment, so I’m using Firefox and Chrome simultaneously. I also have pen-and-paper post-its and to-do lists everywhere. I consider those applications too!

You studied technoethics and posthumanism–can you talk briefly about how these disciplines inform your approach to technology and your work at Tipping Point & Cookstr?

I chose Sarah Lawrence College specifically to study creative writing and to never take a math or science class again. I did terribly in high school physics because I could not philosophically wrap my mind around harsh laws about the relationship of space and time and speed and distance. There seemed no room for seeming there, for nonlinear magical thinking.

Slowly in college, I edged into classes in the Science, Technology and Society department, and found that Donna Haraway, Ray Kurzweil, James Hughes, and others talked science and tech in a language I understood. I realized that there wasn’t the same distinction anymore between “serious science” (the kind I “didn’t get” and was “bad at”) and the stuff I loved, like watching social networks evolve.

Tipping Point believes that technology has the power to change everything. The big picture never gets lost in the details of building tech. Cookstr, the food and technology company I manage, which was co-founded by Tipping Point, is a great example.

Cookstr runs on the power of metadata. Metadata creates a standard, a set of tags curated by food experts that are specifically relevant to recipe content. In our CMS, experts can seamlessly attach their knowledge to recipes. The combination of data (recipes) and metadata allow users to access knowledge differently through technology.

As we relearn the importance of food and cooking, technology helps us access expert knowledge, like that in cookbooks, that was once passed down generationally. Metadata allows us to organize content so that we can find it and use it, even generations later.

You can know something as if you’ve always known it!

What was the most important thing that you’ve learned in the past year and how did you learn it?

I’ve learned that often, if you ask for something, you might get it. This is true whether that thing is seemingly small, like a free cake box at Panera or flowers that a florist will throw away; or medium, like product sponsorship for an event you’re planning; or big, like more responsibilities at your job or more compensation in accordance with those responsibilities. I think fear of rejection is so ingrained, as is the assumption that women are supposed to wait to be asked to do something and that it’s inappropriate to speak out about what you want.

I like technology that breaks down the boundaries between what is real & what is unreal http://bit.ly/LO6LA9 via @Skillcrush @karalearota 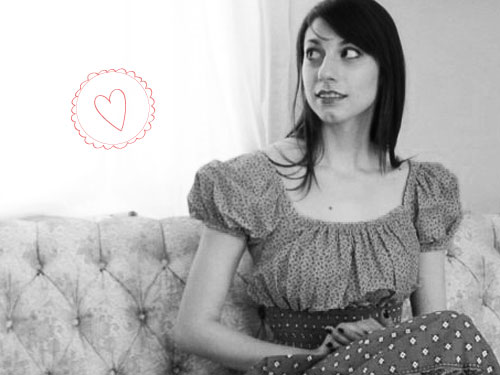