Heidi Larsen is the creator and editor of Foodiecrush, an online blog and magazine that curates the best of the best in the food blogging world. With a background in print magazine design, Heidi knows that digital is the future but also knows what makes magazines worth cutting up and pasting all over your wall. So she has come up with the perfect compromise: a regular food blog and a quarterly glossy food magazine, published online. Check out the blog, browse the beautiful magazine, and tweet her @foodiecrush.

You spent the earlier part of your career working at various print publications. Why did you decide to launch an online magazine?
I’ve always been obsessed with magazines and have spent hours studying and escaping within them. In 7th grade, I made an entire book of different typefaces and phrases cut from magazines. My bedroom’s cork-covered wall was covered floor to ceiling with images cut from the pages of glossy mags like Elle and Vogue.

I’m still a huge fan of print; but, with the advances in technology and introduction of magazine viewers like Issuu and MagCloud, as well as the ubiquity of digital devices like the iPad and Kindle Fire, there are new ways to create, distribute, and self-publish digital content at a fraction of the cost.

Foodiecrush curates the best of the best food bloggers. Why did you choose to focus on food bloggers?
I toyed with creating a magazine about dogs and their celebrity owners—a Twisted Sister of Us Magazine and TMZ—but thankfully I abandoned that idea. At around that same time, blogging was becoming more and more popular and food bloggers were popping up on every corner of the web. I saw an opportunity to focus on curating food blogs because there was already a built in readership who wanted to know more about the bloggers themselves.

The thing that all print publishers are trying to figure out is how to convert a print reader into an online reader.  I knew someone was going to come up with the same idea so I decided to jump in fast.

You have some great advertisers in your digital magazine and blog. At what point were you able to attract advertisers to your site? And, how did you go about building these relationships?
The ads on my site are maintained by an ad network—that was brought to my attention when someone approached me at a conference. Blogs often work with several ad networks—usually, one main ad network and other back ups that populate the ad spaces if the main network doesn’t have enough ads to fill all of your inventory. Working with a network is great because it takes the headache out of creating relationships with big companies, which is really difficult when you’re just a dot of sand in the big sandbox of the web.

My magazine’s first two issues were completely ad free, although not by design. I originally intended to feature advertising and promotional partners within the magazine. However, I’m a one woman show. At the time, I was working on launching the site while holding a full time job and managing a little thing called a family. That made it impossible to also sell ads. So rather than bailing on the entire project, I went ahead and decided to publish the magazine—even though it didn’t generate revenue.

My original intent wasn’t ever just to make money. I had made a promise to my contributors and to myself and I kept it.

That being said, I’m happy to take on any revenue generated from the magazine and have been toying with starting a Kickstarter campaign. The blog and magazine have also led to new opportunities such as creating recipes, photographs, e-books, and custom publications for other companies.

You have attracted a large following on your blog and for your magazine. What tools and strategy have you used to grow your audience?
Oh, I don’t know that my following is very large in the scheme of things; but, I do appreciate each and every person who bothers to come ’round my little piece of the food blogging world. I follow the strategy of my mentor and friend Courtney who has encouraged me to create content that is honest, solves a problem, and is injected with my own personality and even vulnerability. Other than that, I try to be consistent in my blogging schedule—blogging 3 times per week—and I also like to interact with readers, other bloggers, and brands on social media.

What are your five favorite apps?
I am a big fan of: 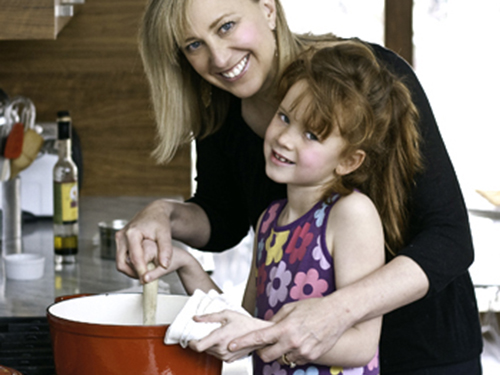