It’s been a long time since we’ve had to memorize phone numbers! These days you keep all of your friends and family plugged into your phone book, so you just scroll down to “Jane,” hit call, and there you go. It’s the same sort of things with computers.

Back before domain names, every computer could only be found by its address on the Internet, which looks something like 192.168.0.1. These are called IP addresses. Domain names are easily-remembered versions of those numbers – instead of typing 216.172.190.36 into Firefox, you can just type in skillcrush.com and your computer knows where to go!

Every domain name has a few different pieces. The most common part is called the TLD – the top level domain. That’s the .com or .org or .net.

When the web first started, there weren’t too many; .gov, .edu, .com, .mil, .org, .net and .int. They were each originally supposed to have a purpose – .org was for nonprofits, .mil was military, .com was commercial, .net was computer network companies, .int was international businesses, and so on. These days only .mil, .edu and .gov guidelines are enforced. Big business can buy a .org, no problem!

Instead of being related to a business type, top level domains can also be based on countries. .co.uk is the UK, .jp is Japan, .nu is the tiny country of Niue. Among new internet companies, .ly – which is for Libya – is super popular. You can see a big long list of all the countries on Wikipedia.

The next level up is the “example” in example.com, or “skillcrush” in skillcrush.com. That’s called a second-level domain, and is what we usually think of when we talk about “domain names.” When the Internet was first made public these domains were only sold by Network Solutions, but these days there are many many more companies out there that sell them.

So how do we manage all of these layers and enforce all of these rules? ICANN – the Internet Corporation for Assigned Names and Numbers – is a nonprofit created by the US government that controls the ins and outs of naming on the Internet. If someone steals a domain from you or there are copyright troubles, ICANN is the organization that is called in to arbitrate. They’re also responsible for licensing everyone who sells domains, from Network Solutions to Google to GoDaddy.

As of late, ICANN has been producing a lot of new TLD’s. Instead of sticking with .com and .net, they’ve come up with ones like .aero, .biz, .coop, .pro, .museum and many more. There are a lot more on the drawing board, too – from .africa for African sites to .nyc and .wien for New York City and Vienna.

ICANN has also been taking steps recently to allow anything to be a top-level domain – from .pepsi to .ipad – just like second-level domains are currently. Don’t go rushing out to buy your name, though! It’s going to cost you a $185,000 application fee, and $25,000 a year after that. You can read more here.

“Domain hacks” aren’t about that kind of hacking, instead they’re some clever tricks you can use when picking a domain name.

For example, the domain .us is the country-based TLD for the United States, and could be used for normal domains like example.us or nike.us. If you wanted to be clever, though, you register a domain like delicio.us and suddenly you’ve got a great-named site! delicio.us beats out delicious.com any day in the fun-sounding department. 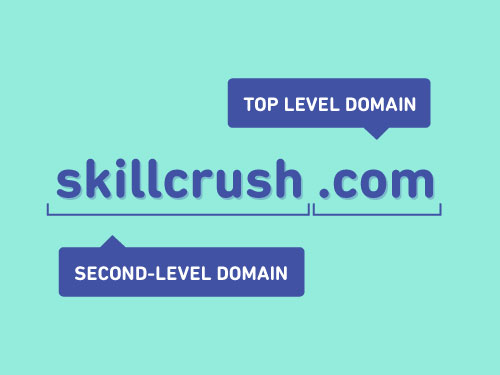