If you’ve ever seen the movie Ratatouille, you’re familiar with the idea that “anyone can cook.” In this case, Ratatouille achieves culinary mastery by deftly making his way up the Parisian restaurant food chain—a seemingly insurmountable feat for a rat and proof positive that anyone can cook (even if only in an animated movie).

It’s a variation of this idea, “anyone can code,” that drives us forward here at Skillcrush. Our mission is to help even the most reticent learners realize that developing new technical skills is not only possible, but might also be a little bit fun. Who doesn’t want to understand what the developer sitting next to them is talking about when she says, “should we use FTP or SFTP to upload this to the server?” Or, how the Facebook API is powering the social web and creeping into every aspect of our lives?

And we hope, that if you are reading the Skillcrush newsletter you are already finding out that tech know-how and fun can go hand-in-hand.

There are a number of companies out there that have embraced this ethos and have started to make basic digital literacy a core job requirement. And, even some who have made the jump to hiring and supporting newbie programmers.

We’ve been inspired, in particular, by the folks at Yipit. Founder Vin Vacanti wrote a fantastic series of posts detailing how he became his own technical co-founder by using a set of super-accessible (and, mostly free) resources and just hammering away at it for a few weeks. And, his just-do-it mentality has trickled down to his staffers.  David Sinsky and Suneel Chakravorty, two self-taught Yipit developers, have also written great posts on how they mastered the craft of code working weekends over the course of just two months.

So, just think! Instead of spending your nights and weekends watching your favorite Buffy the Vampire Slayer re-runs, you could dedicate that time to learning the basics of Python and working your way towards building your own prototype of that find-a-guy-who-likes-Buffy-too dating app that you’ve dreamed up.

Better yet, grab a couple of friends, put Buffy on in the background, and commit to learning to code together! The links above are a great place to start. You may not end up building your own prototype in a month, but you will have at least started down the path toward digital literacy.

And, you’ll begin to understand that “anyone (including you) can code!”

If Remy the rat can cook, then I can definitely code. @yipit your story has inspired me! http://bit.ly/TLHFFr via @Skillcrush

Anyone can code, just look at Yipit! 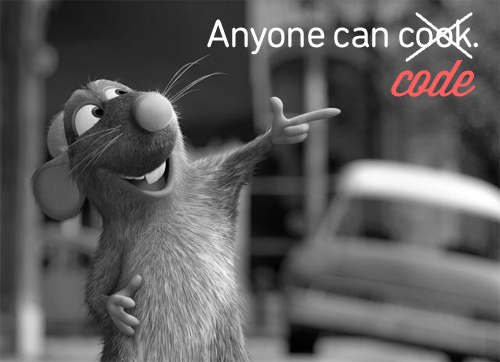